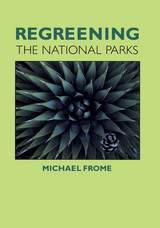 What has happened to our national parks? Overcrowding and commercialization are commonplace, and with the increase in visitation has come not only congestion but crime. Yet visitor enjoyment seems to be a higher priority of those who manage the parks than the protection and perpetuation of natural systems. How could this have happened? Michael Frome, one of the most outspoken and highly regarded observers of our national parks, here shows how the original mission of the National Park Service has been undermined by politicization and bureaucratization. Regreening the National Parks tells how the Park Service has been transformed from a professional to a political agency and in the process has betrayed its own values by emphasizing recreation and "short-order wilderness served like fast food" rather than the preservation of the nation's natural heritage. Frome has drawn on both official documents and personal interviews to examine the policies--and personalities--behind the scenes at the National Park Service. He cites instances of personnel being forbidden to criticize public policy in which they found a conflict with conservation principles, and contends that, as the Park Service has become more bureaucratic, those for whom the environment deeply matters scarcely rise within its ranks. In considering the environmental abuse rampant today, Frome sees national parks as models of respect for nature and concludes his book with a ten-point program toward realizing that ideal.