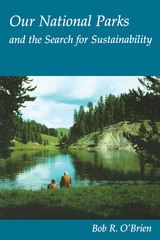 Yosemite Valley in July of 1967 would have had to be seen to be believed. There was never an empty campsite in the valley; you had to create a space for yourself in a sea of cars, tents, and humanity. . . . The camp next to ours had fifty people in it, with rugs hung between the trees, incense burning, and a stereo set going full volume. Scenes such as this will probably never be repeated in Yosemite or any other national park, yet the urgent problem remains of balancing the public’s desire to visit the parks with the parks’ need to be protected from too many people and cars and too much development. In this book, longtime park visitor and professional geographer Bob O’Brien explores the National Park Service’s attempt to achieve "sustainability"—a balance that allows as many people as possible to visit a park that is kept in as natural a state as possible. O’Brien details methods the NPS has used to walk the line between those who would preserve vast tracts of land for "no use" and those who would tap the Yellowstone geysers to generate electricity. His case studies of six western "crown jewel" parks show how rangers and other NPS employees are coping with issues that impact these cherished public landscapes, including visitation, development, and recreational use.
AUTHOR BIOGRAPHY
A professor of geography at San Diego State University, Bob R. O'Brien currently teaches courses on the national parks, outdoor recreation, and ecotourism.
TABLE OF CONTENTS