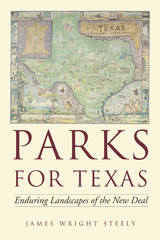 State parks across Texas offer a world of opportunities for recreation and education. Yet few park visitors or park managers know the remarkable story of how this magnificent state park system came into being during the depths of the Great Depression in the 1930s. Drawing on archival records and examining especially the political context of the New Deal, James Wright Steely here provides the first comprehensive history of the founding and building of the Texas state park system.

Steely's history begins in the 1880s with the movement to establish parks around historical sites from the Texas Revolution. He follows the fits-and-starts progress of park development through the early 1920s, when Governor Pat Neff envisioned the kind of park system that ultimately came into being between 1933 and 1942.

During the Depression an amazing cast of personalities from Franklin D. Roosevelt to Lyndon Johnson led, followed, or obstructed the drive to create this state park system. The New Deal federal-state partnerships for depression relief gave Texas the funding and personnel to build 52 recreational parks under the direction of the National Park Service. Steely focuses in detail on the activities of the Civilian Conservation Corps, whose members built parks from Caddo Lake in the east to the first park improvements in the Big Bend out west. An appendix lists and describes all the state parks in Texas through 1945, while Steely's epilogue brings the parks' story up to the present.