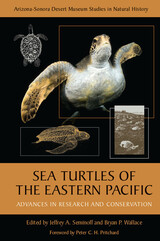 Sea turtles are flagship species for the world's oceans. They traverse international boundaries during their migrations, serve as vehicles for marine nutrients to terrestrial habitats, and embody the often tenuous relationship between human action and ecosystem health. The East Pacific Ocean is home to some of the most dynamic marine ecosystems, and the most unique sea turtles. Marine biodiversity within this massive ocean region abounds in mangrove estuaries, seagrass pastures, coral reefs, the open ocean, and many other habitats, with sea turtles often the most conspicuous species present. The distinctive traits of the Eastern Pacific have resulted in the smallest leatherbacks, a singular morph of the green turtle, dark and steeply domed olive ridleys, and the most cryptic hawksbills on the planet. Only now are we beginning to understand how these varieties have evolved.

However, the oceanographic conditions that make this an epicenter of sea turtle activity also promote massive artisanal and industrial fishing efforts that, coupled with illegal harvesting of eggs and turtles, have led to declines of several turtle populations in the region. The essays and stories in Sea Turtles of the Eastern Pacific describe for the first time the history of this exploitation, as well as recent sea turtle conservation initiatives and scientific research in the region. The first third of the book considers the biology of the turtles, focusing on general overviews of current ecological management challenges facing the turtles' survival. The second third treats issues of marine policy related to turtle conservation. In conclusion, the book offers six compelling stories of conservation success. By the end, readers will have gained a in-depth view not only of these magnificent creatures, but also the people involved in research and conservation efforts in one of the most remarkable regions of our planet.

Jeffrey A. Seminoff leads the Marine Turtle Ecology & Assessment Program at the U.S. National Marine Fisheries Service’s Southwest Fisheries Science Center in La Jolla, California. He is also an adjunct faculty member at Indiana-Purdue University and the University of Florida. He currently serves as the US Delegate for the Scientific Committee of the Inter-American Convention for the Protection and Conservation of Sea Turtles.

Bryan P. Wallace is the Director of Science for the Marine Flagship Species Program, Global Marine Division, Conservation International. He is also an adjunct faculty member in the Center for Marine Conservation at the Duke University Marine Laboratory. He currently serves as the Chair of the Scientific Advisory Board of SWOT (The State of the World’s Sea Turtles) and is an editor of the State of the World’s Sea Turtles—SWOT Report.

Appendix
About the Editors
About the Contributorss
Index