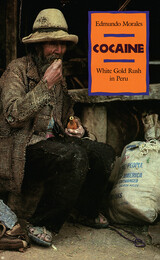 Cocaine: Much is known about the damage done by this drug in the United States; yet how much is actually known of its impact at its source? Though most processed cocaine comes from Colombia, more than half of the coca paste from which the drug is made originates in the vast jungle slopes shared by Bolivia and Peru. People here have chewed coca leaves for centuries, but only over the last twenty years has coca become a major cash crop. Now it supports local economies, feeds inflation, and affects the social behavior of Peruvians. Edmundo Morales, a Peruvian who is now a drug researcher in the United States, has conducted an extensive study of this underground economy to show how cocaine has changed the social, cultural, economic, and political climate of Peru--and why government efforts are unable to stop it. With statistics on coca agriculture, a description of coca-paste manufacturing, and an examination of the industry's social structure, Morales's book is an inside look at the "white gold rush" that only a Peruvian could have written. It offers a new perspective for understanding a problem that is usually seen only as it affects our own society, and it proposes a new look at policies directed toward its control.
AUTHOR BIOGRAPHY
Edmundo Morales is an associate professor of sociology at West Chester University.