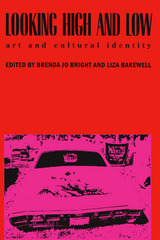 Can low-riders rightfully be considered art? Why are Chicano murals considered art while graffiti is considered vandalism? What do Native American artisans think about the popular display of their ceremonial objects? How do the "middlebrow" notions of Getty workers influence "highbrow" values at the J. Paul Getty Trust? Looking High and Low attempts to answer these questions—and the broader question "What is art?"—by bringing together a collection of challenging essays on the meaning of art in cultural context and on the ways that our understandings of art have been influenced by social process and aesthetic values.

Arguing that art is constituted across cultural boundaries rather than merely inside them, the contributors explore the relations between art, cultural identity, and the social languages of evaluation—among artists, art critics, art institutions, and their audiences—in the Southwest and in Mexico. The authors use anthropological methods in art communities to uncover compelling evidence of how marginalized populations make meaning for themselves, how images of ethnicity function in commercial culture, how Native populations must negotiate sentimental marketing and institutional appropriation of their art work, and how elite populations use culture and ritual in ways that both reveal and obscure their power and status. The authors make dramatic revelations concerning the construction and contestation of ideas of art as they circulate between groups where notions of what art "should" be are often at odds with each other.

This volume challenges conventional modes of analyzing art. Its ethnographic explorations illuminate the importance of art as a cultural force while creating a greater awareness of the roles that scholars, museum curators, and critics play in the evaluation of art.