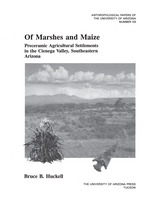 Of Marshes and Maize: Preceramic Agricultural Settlement in the Cienega Valley, Southeastern Arizona
by Bruce B. Huckell
University of Arizona Press, 1995
Paper: 978-0-8165-1582-0
While it was once believed that agriculture and pottery developed concurrently in prehistoric societies, modern research has concluded that agriculture preceded pottery making, since a sedentary life with greater food production led to both the need and time to create storage containers. Bruce Huckell has been at the forefront of a movement in Arizona archaeology that has greatly modified our understanding of the transition from the Archaic to the agricultural periods in the Southwest. Work done by Huckell and others at Matty Canyon has produced the most detailed account available of a Late Archaic village and has been extremely influential in suggesting that the cultivation of maize predated the appearance of pottery. Of Marshes and Maize presents archaeological information obtained from small-scale investigations at two deeply buried preceramic sites in the Cienega Creek Basin. Its report on excavations at the Donaldson Site and at Los Ojitos offers a thorough description of archaeological features and artifacts, floral and faunal remains, and their geological and chronological contexts. From this data, the author concludes that a major shift toward a sedentary lifeway dependent on maize agriculture had already occurred by Late Archaic times (c. 500 to 800 B.C.), demonstrating that previous research on late preceramic sites in this region has provided an inadequate picture of the period. This monograph represents the first full presentation in the literature of an important set of data that is well-known among researchers but has thus far not been easily accessible. It is a classic example of the use of fragmentary evidence in well-dated contexts to introduce new ideas, and will stand not only as an important record of the evidence but also as the primary reference for this significant new interpretation of the late Archaic and the introduction of agriculture into the Southwest.
AUTHOR BIOGRAPHY
Bruce B. Huckell is senior research coordinator with the Maxwell Museum of Anthropology at the University of New Mexico. He has extensive field work experience in the Southwest and has published articles in numerous publications, including American Antiquity and The Journal of World Prehistory.