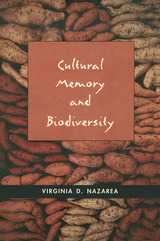 Seed and gene banks have made great strides in preserving the biological diversity of traditional agricultural plant species, but they have tended to ignore a serious component: the knowledge about those crops and methods of farming held by the people who have long raised them. Virginia Nazarea now makes a case for preserving cultural memory along with biodiversity. By exploring how indigenous people farm sweet potatoes in Bukidnon, Philippines, she discovers specific ways in which the conservation of genetic resources and the conservation of culture can support each other. Interweaving a wealth of ecological and cognitive data with oral history, Nazarea details a "memory banking" protocol for collecting and conserving cultural information to complement the genetic, agronomic, and biochemical characterization of important crops. She shows that memory banking offers significant benefits for local populations—not only the preservation of traditional knowledge but also the maintenance of alternatives to large-scale agricultural development and commercialization. She also compares alternative forms of germplasm conservation conducted by a male-dominated hierarchy with those of an informal network of migrant women. Cultural Memory and Biodiversity establishes valuable guidelines for people who aspire to support community-based in situ conservation of local varieties. Perhaps more important, it shows that the traditional methods of local farmers are often as important as the "advanced" methods encouraged by advocates of modernization.
AUTHOR BIOGRAPHY
Virginia D. Nazarea is Professor of Anthropology at the University of Georgia.