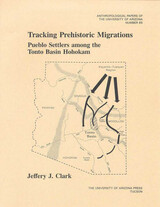 This monograph takes a fresh look at migration in light of the recent resurgence of interest in this topic within archaeology. The author develops a reliable approach for detecting and assessing the impact of migration based on conceptions of style in anthropology. From numerous ethnoarchaeological and ethnohistoric case studies, material culture attributes are isolated that tend to be associated only with the groups that produce them. Clark uses this approach to evaluate Puebloan migration into the Tonto Basin of east-central Arizona during the early Classic period (A.D. 1200-1325), focusing on a community that had been developing with substantial Hohokam influence prior to this interval. He identifies Puebloan enclaves in the indigenous settlements based on culturally specific differences in the organization of domestic space and in technological styles reflected in wall construction and utilitarian ceramic manufacture.

Puebloan migration was initially limited in scale, resulting in the co-residence of migrants and local groups within a single community. Once this co-residence settlement pattern is reconstructed, relations between the two groups are examined and the short-term and long-term impacts of migration are assessed. The early Classic period is associated with the appearance of the Salado horizon in the Tonto Basin. The results of this research suggest that migration and co-residence was common throughout the basins and valleys in the region defined by the Salado horizon, although each local sequence relates a unique story. The methodological and theoretical implications of Clark's work extend well beyond the Salado and the Southwest and apply to any situation in which the scale and impact of prehistoric migration are contested.
AUTHOR BIOGRAPHY
Jeffrey J. Clark is a senior project director of Desert Archaeology in Tucson. He has conducted research in the Tonto Basin and neighboring areas for the past ten years.
TABLE OF CONTENTS
Contents
Preface
Acknowledgments
1. Revisiting Migration
2. Detecting Prehistoric Migrations
3. The Salado and the Tonto Basin
4. The Case for Migration
5. Migrant Origins, Motivation, and Impact
6. Implications for the Salado and Beyond
References
Index
Abstract, Resumen