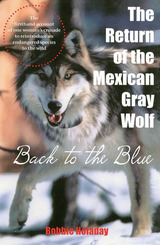 The return of the Mexican gray wolf to Arizona's Blue Range in 1998 marked more than a victory for an endangered species. Long hated by ranchers, the gray wolf had been hunted to the brink of extinction until one woman took on the challenge of restoring it to its natural habitat.

Inspired by the plight of the Mexican gray wolf, retiree Bobbie Holaday formed the citizens advocacy group Preserve Arizona's Wolves (P.A.WS.) in 1987 and embarked on a crusade to raise public awareness. She soon found herself in the center of a firestorm of controversy, with environmentalists taking sides against ranchers and neighbors against neighbors. This book tells her story for the first time, documenting her eleven-year effort to bring the gray wolf back to the Blue.

As Holaday quickly learned, ranchers exerted considerable control over the state legislature, and politicians in turn controlled decisions made by wildlife agencies. Even though the wolf had been listed as endangered since 1976, opposition to it was so strong that the Arizona Game and Fish Department had been unable to launch a recovery program. In The Return of the Mexican Gray Wolf, Holaday describes first-hand the tactics she and other ordinary citizens on the Mexican Wolf Recovery Team adopted to confront these obstacles. Enhanced with more than 40 photographs—32 in color—her account chronicles both the triumphs of reintroduction and the heartbreaking tragedies the wolves encountered during early phases.

Thanks to Holaday's perseverance, eleven wolves were released into the wild in 1998, and the Blue Range once again echoed with their howls. Her tenacity was an inspiration to all those she enlisted in the cause, and her story is a virtual primer for conservation activists on mobilizing at the grassroots level. The Return of the Mexican Gray Wolf shows that one person can make a difference in a seemingly hopeless cause and will engage all readers concerned with the preservation of wildlife.

All royalties go to the Mexican Wolf Trust Fund administered by the Arizona Game and Fish Department.

AUTHOR BIOGRAPHY
Bobbie Holaday has received numerous awards in recognition of her role in restoring the gray wolf, including the Defenders of Wildlife's Conservation Award for Excellence and the Sierra Club's Award for Outstanding Achievement. She lives in Phoenix and continues to work and speak on behalf of wolves.
TABLE OF CONTENTS