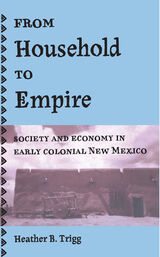 Settlers at Santa Fe and outlying homesteads during the seventeenth century established a thriving economy that saw the exchange of commodities produced by indigenous peoples, settlers, and Franciscan friars for goods manufactured as far away as China, France, and Turkey. This early Spanish colonial period in New Mexico provides an opportunity to explore both economic activity within a colony and the relations between colony and homeland. By examining the material remains of this era from 1598 to 1680, Heather Trigg reveals a more complete picture of colonial life. Drawing on both archaeological and historical sources, Trigg analyzes the various levels of economic activity that developed: production of items in colonial households, exchanges between households, and trade between the colony and Mexico. Rather than focusing only on the flow of products and services, she also explores the social mechanisms that likely had a significant impact on the economic life of the colony. Because economic activity was important to so many aspects of daily life, she is able to show how and why colonial society worked the way it did. While focusing on the colonists, she also explores their relations with Pueblo peoples. Through her analysis of these two pools of data, Trigg generates insights not usually gleaned from the limited texts of the period, providing information about average colonists in addition to the governors and clergy usually covered in historical accounts. By using specific examples from historical documents and archaeological materials, she shows that colonists from all levels of society modified both formal and informal rules of economic behavior to better fit the reality of the colonial frontier. With its valuable comparative data on colonization, From Household to Empire provides a novel way of examining colonial economies by focusing on the maintenance and modification of social values. For all readers fascinated by the history of the Southwest, this book provides a fuller picture of life in early New Mexico than has previously been seen.
TABLE OF CONTENTS