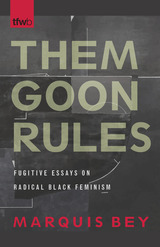 Marquis Bey’s debut collection, Them Goon Rules, is an un-rulebook, a long-form essayistic sermon that meditates on how Blackness and nonnormative gender impact and remix everything we claim to know.

A series of essays that reads like a critical memoir, this work queries the function and implications of politicized Blackness, Black feminism, and queerness. Bey binds together his personal experiences with social justice work at the New York–based Audre Lorde Project, growing up in Philly, and rigorous explorations of the iconoclasm of theorists of Black studies and Black feminism. Bey’s voice recalibrates itself playfully on a dime, creating a collection that tarries in both academic and nonacademic realms.

Fashioning fugitive Blackness and feminism around a line from Lil’ Wayne’s “A Millie,” Them Goon Rules is a work of “auto-theory” that insists on radical modes of thought and being as a refrain and a hook that is unapologetic, rigorously thoughtful, and uncompromising.
AUTHOR BIOGRAPHY
Marquis Bey is a PhD candidate in English at Cornell University. He has received fellowships from Humanities New York and the Ford Foundation.
TABLE OF CONTENTS