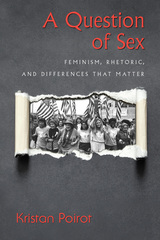 By the mid-1990s feminist theorists and critics began to challenge conventional thinking about sex difference and its relationship to gender and sexuality. Scholars such as Anne Fausto-Sterling and Judith Butler troubled the sex-gender/nature-nurture divide. Some have asserted that these questions about sex are much too abstract to contribute to a valuable understanding of the material politics faced by feminist movements. In A Question of Sex, Kristan Poirot challenges this assumption and demonstrates that contemporary theories about sex, gender, identity, and difference compel a rethinking of the history of feminist movements and their rhetorical practices.

Poirot focuses on five case studies—the circulation of Sojourner Truth's "Ain't I a Woman?" in early and contemporary feminist contexts; the visual rhetorics of the feminist self-help health movement; the public discourse of Elizabeth Cady Stanton and early nineteenth-century ideas about suffrage, sex, and race; the conflicts over lesbian sexuality in the 1960s and 1970s; and the discourse that surrounds twenty-first-century SlutWalks. In the process, Poirot rethinks the terms through which we understand U.S. feminist movements to explore the ways feminism has questioned sexed distinctions and practices over time. She emphasizes the importance of reading feminist engagements with sex as rhetorical endeavors—practices that are shaped by the instrumental demands of movements, the exigent situations that call for feminists to respond, and the enduring philosophical traditions that circulate in U.S. political contexts., reviewing a previous edition or volume
AUTHOR BIOGRAPHY
Kristan Poirot is assistant professor in communication and women's and gender studies at Texas A&M University.