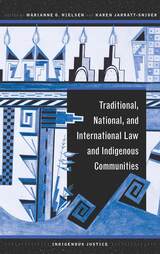 This volume of the Indigenous Justice series explores the global effects of marginalizing Indigenous law. The essays in this book argue that European-based law has been used to force Indigenous peoples to assimilate, has politically disenfranchised Indigenous communities, and has destroyed traditional Indigenous social institutions. European-based law not only has been used as a tool to infringe upon Indigenous human rights, it also has been used throughout global history to justify environmental injustices, treaty breaking, and massacres. The research in this volume focuses on the resurgence of traditional law, tribal–state relations in the United States, laws that have impacted Native American women, laws that have failed to protect Indigenous sacred sites, the effect of international conventions on domestic laws, and the role of community justice organizations in operationalizing international law.

While all of these issues are rooted in colonization, Indigenous peoples are using their own solutions to demonstrate the resilience, persistence, and innovation of their communities. With chapters focusing on the use and misuse of law as it pertains to Indigenous peoples in North America, Latin America, Canada, Australia, and New Zealand, this book offers a wide scope of global injustice. Despite proof of oppressive legal practices concerning Indigenous peoples worldwide, this book also provides hope for amelioration of colonial consequences.
AUTHOR BIOGRAPHY
Marianne O. Nielsen is a professor in the Department of Criminology and Criminal Justice at Northern Arizona University and the co-editor of Crime and Social Justice in Indian Country.

Karen Jarratt-Snider is an associate professor and chair of Applied Indigenous Studies at Northern Arizona University and the co-editor of Crime and Social Justice in Indian Country.