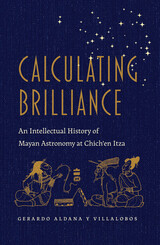 To the modern eye, the architects at Chich’en Itza produced some of the most mysterious structures in ancient Mesoamerica. The purpose and cultural influences behind this architecture seem left to conjecture. The people who created and lived around this stunning site may seem even more mercurial.

Near the structure known today as the Great Ball Court and within the interior of the Lower Temple of the Jaguar, a mural depicts a female Mayan astronomer called Ilaj K’uk’il Ek’. Weaving together archaeology, mathematics, history, and astronomy, Calculating Brilliance brings to light the discovery by this Mayan astronomer, which is recorded in the Venus Table of the Dresden Codex. As the book demonstrates, this brilliant discovery reverberated throughout Mayan science. But it has remained obscured to modern eyes.

Jumping from the vital contributions of Ilaj K’uk’il Ek’, Gerardo Aldana y Villalobos critically reframes science in the pre-Columbian world. He reexamines the historiography of the Dresden Codex and contextualizes the Venus Table relative to other Indigenous literature. From a perspective anchored to Indigenous cosmologies and religions, Aldana y Villalobos delves into how we may understand Indigenous science and discovery—both its parallels and divergences from modern globalized perspectives of science.

Calculating Brilliance brings different intellectual threads together across time and space, from the Classic to the Postclassic, the colonial period to the twenty-first century to offer a new vision for understanding Mayan astronomy.

AUTHOR BIOGRAPHY
Gerardo Aldana y Villalobos is a professor in the Department of Chicana/o Studies at University of California, Santa Barbara. He is the author of The Apotheosis of Janaab Pakal: Science, History and Religion at Classic Maya Palenque and specializes in Mayan hieroglyphic history and science and technology studies.