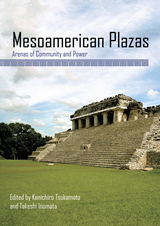 Until now, archaeological and historical studies of Mesoamerican plazas have been scarce compared to studies of the surrounding monumental architecture such as pyramidal temples and palaces. Many scholars have assumed that ancient Mesoamericans invested their labor, wealth, and symbolic value in pyramids and other prominent buildings, viewing plazas as by-products of these buildings. Even when researchers have recognized the potential significance of plazas, they have thought that plazas as vacant spaces could offer few clues about their cultural and political roles. Mesoamerican Plazas challenges both of these assumptions.

The primary question that has motivated the contributors is how Mesoamerican plazas became arenas for the creation and negotiation of social relations and values in a community. The thirteen contributions stress the significance of interplay between power relations and embodied practices set in specific historical and material settings, as outlined by practice theory and performance theory. This approach allows the contributors to explore broader anthropological issues, such as the negotiation of power relations, community making, and the constitution of political authorities.

Overall, the contributions establish that physical interactions among people in communal events were not the outcomes of political machinations held behind the scenes, but were the actual political processes through which people created, negotiated, and subverted social realities. If so, spacious plazas that were arguably designed for interactions among a large number of individuals must have also provided critical arenas for the constitution and transformation of society.
AUTHOR BIOGRAPHY
Kenichiro Tsukamoto is a PhD candidate in anthropology at the University of Arizona. He is co-director of the El Palmar Archaeological Project. His project has been sponsored by the National Science Foundation, National Geographic Society, and American Philosophical Society.

Takeshi Inomata is a professor of anthropology at the University of Arizona. He is the author of several books, including Burned Palaces and Elite Residences of Aguateca: Excavations and Ceramics.
TABLE OF CONTENTS