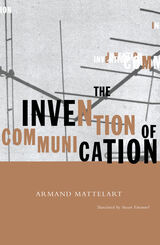 A fascinating tour of all of the ways we have thought about communication, now and in the past.

Today, it is the Internet. One hundred years ago, it was the telegraph. And before that? Networks of road, rail, and water. It's all "communication." The Invention of Communication invites us to explore all the multifarious meanings that have made up our age-old attempts to connect. The book offers a heady tour of the multiple usages and systems that each historic period puts forth in the name of communication.

A veritable history of the idea of the social, Armand Mattelart's genealogy maps the many means by which humans interact-from carefully cataloguing Others, to asserting power over them, to working together with them to build new forms of community. Studying a vast array of modern forms of social intercourse and control, The Invention of Communication takes up topics such as the elaboration of warfare as a logistic, the rise of professional societies of propaganda and national propagation, the history of universal expositions and world fairs, the birth of documentary film out of physiological investigations in the nineteenth century, the development of the popular press and the popular novel, and the origins of American social science.

This history runs from the circuits of exchange to the circulation of goods, people, and messages, from the construction of railroads to the emergence of long-distance communication. Throughout, Mattelart brings a clarifying perspective to the ideologies and theories that accompany these transformations. He shows how Enlightenment and nineteenthÂ­century utopian thinking about communication led to the strategic and geopolitical thinking of the twentieth century, and finally to mass and individual psychosociology, mass culture, and marketing. The Invention of Communication is a remarkable interpretation of the dizzying complex of systems supporting the social world of modernity.

"Mattelart has, in a way, produced something of an academic cocktail. A blend of thoughts of some of the greatest scholars over the last two to three hundred years mixed to produce a series of claims about the importance of communication issues at central moments in the emergence of our modern times." Semiotica

Armand Mattelart is professor of information and communication sciences at the UniversitÃ© de HauteÂ­Bretagne, France. He is the author of Mapping World Communication (Minnesota, 1994) and coauthor (with MichÃ¨le Mattelart) of Rethinking Media Theory (Minnesota, 1992).

Susan Emanuel lives in Massachusetts and France. Among her translations are Mapping World Communication (Minnesota, 1994) by Armand Mattelart as well as The Contemplation of the World by Michel Maffesoli (Minnesota, 1996).
TABLE OF CONTENTS