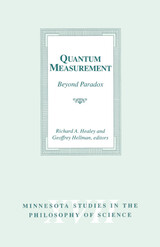 Quantum Measurement: Beyond Paradox
by Richard A. Healey
contributions by Geoffrey Hellman
University of Minnesota Press, 1998
Cloth: 978-0-8166-3065-3
Together with relativity theory, quantum mechanics stands as the conceptual foundation of modern physics. It forms the basis by which we understand the minute workings of the subatomic world. But at its core lies a paradox: standard conceptions of quantum mechanics imply that many of the actual measurements whose results we take to support and verify quantum mechanical theory can have no definite outcomes. Some quantity such as position or momentum is always indefinite on a quantum system; and if an indefinite quantity is measured, the macroscopic state of the measuring apparatus that is supposed to record the outcome instead becomes indefinite itself. In Quantum Measurement, editors Richard A. Healey and Geoffrey Hellman marshal the resources of leading physicists and philosophers of science, skillfully joining their insights and ingenuity to yield some of the most innovative and altogether promising thought to date on this enigmatic issue.

Throughout this authoritative volume, these authors explore the subtle and varied ways in which quantum mechanics informs the conditions, indeed the very process, of quantum measurement. The latest work on decoherence phenomena is combined with sophisticated modal interpretations, suggesting that definite values might be systematically attributed to a limited class of quantum observables while gauging the correspondent impact of environmental interactions on quantum interference terms. What emerges from this careful synthesis is a theoretically powerful and energetic new approach to the measurement dilemma, one that furthers our conceptual understanding of the fundamental interconnections between micro- and macroscopic systems, and that strives, ultimately, to describe and define within a unified quantum mechanical framework the breadth of our physical reality.