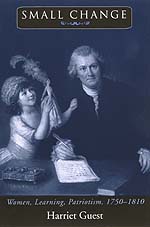 During the second half of the eighteenth century, the social role of educated
women and the nature of domesticity were the focus of widespread debate in Britain. The emergence of an identifiably feminist voice in that debate is the subject of Harriet Guest's new study, which explores how small changes in the meaning of patriotism and the relations between public and private categories permitted educated British women to imagine themselves as political subjects.

Small Change considers the celebration of learned women as tokens of national progress in the context of a commercial culture that complicates notions of gender difference. Guest offers a fascinating account of the women of the bluestocking circle, focusing in particular on Elizabeth Carter, hailed as the paradigmatic learned and domestic woman. She discusses the importance of the American war to the changing relation between patriotism and gender in the 1770s and 1780s, and she casts new light on Mary Wollstonecraft's writing of the 1790s, considering it in relation to the anti-feminine discourse of Hannah More, and the utopian feminism of Mary Hays.
AUTHOR BIOGRAPHY
Harriet Guest is a director of the Centre for Eighteenth Century Studies and senior lecturer in the Department of English and Related Literature at the University of York. She is the author of A Form of Sound Words and co-editor of Johann Reinhold Forster's Observations Made during a Voyage round the World.
TABLE OF CONTENTS


List of Illustrations
Acknowledgments
Introduction
Part I: Learning and Shopping in the Mid-Eighteenth Century
1. These Neuter Somethings: Gender Difference and Commercial Culture
2. The Female Worthies: Memorializing Learned Women
3. A Shoping We Will Go
Part II: The Fame of Elizabeth Carter
4. The Learned Lady as Public Spectacle
5. The Independence of the Learned Lady
6. The Public Profession of Faith
Part III. Femininity and National Feeling in the 1770s and 1780s
7. From Learning to Patriotism
8. This Sentiment of Home
9. Anna Laetitia Barbauld and the Mighty Mothers of Immortal Rome
10. Britain Mourn’d: Anna Seward’s Patriotic Elegies
Part IV. Politics, Sensibility, Domesticity, 1790-1810
11. The Dream of a Common Language: The Strictures on Femininity of Hannah More and Mary Wollstonecraft
12. Modern Love: Feminism and Sensibility in 1796
13. The Neutral Situation of Domesticity
Index