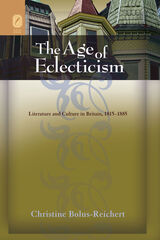 “The burden of the past” invoked by any discussion of eclecticism is a familiar aspect of modernity, particularly in the history of literature. The Age of Eclecticism: Literature and Culture in Britain, 1815–1885 by Christine Bolus-Reichert aims to reframe that dynamic and to place it in a much broader context by examining the rise of a manifold eclecticism in the nineteenth century. Bolus-Reichert focuses on two broad understandings of eclecticism in the period—one understood as an unreflective embrace of either conflicting beliefs or divergent historical styles, the other a mode of critical engagement that ultimately could lead to a rethinking of the contrast between creation and criticism and of the very idea of the original. She also contributes to the emerging field of transnational Victorian studies and, in doing so, finds a way to talk about a broader, post-Romantic nineteenth-century culture.
By reviving eclecticism as a critical term, Bolus-Reichert historicizes the theoretical language available to us for describing how Victorian culture functioned—in order to make the terrain of Victorian scholarship international and comparative and create a place for the Victorians in the genealogy of postmodernism. The Age of Eclecticism gives Victorianists—and other students of nineteenth-century literature and culture—a new perspective on familiar debates that intersect in crucial ways with issues still relevant to literature in an age of multiculturalism and postmodernism.

AUTHOR BIOGRAPHY
Christine Bolus-Reichert is associate professor of English at the University of Toronto.