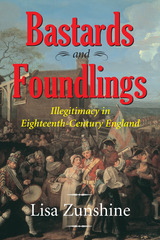 In this compelling interdisciplinary study of what has been called the "century of illegitimacy," Lisa Zunshine seeks to uncover the multiplicity of cultural meanings of illegitimacy in the English Enlightenment. Bastards and Foundlings pits the official legal views on illegitimacy against the actual everyday practices that frequently circumvented the law; it reconstructs the history of social institutions called upon to regulate illegitimacy, such as the London Foundling Hospital; and it examines a wide array of novels and plays written in response to the same concerns that informed the emergence and functioning of such institutions. By recreating the context of the national preoccupation with bastardy, with a special emphasis on the gender of the fictional bastard/foundling, Zunshine offers new readings of "canonical" texts, such as Steele's The Conscious Lovers, Defoe's Moll Flanders, Fielding's Tom Jones, Moore's The Foundling, Colman's The English Merchant, Richardson's Clarissa and Sir Charles Grandison, Burney's Evelina, Smith's Emmeline, Edgewort's Belinda, and Austen's Emma, as well as of less well-known works, such as Haywood's The Fortunate Foundlings, Shebbeare's The Marriage Act, Bennett's The Beggar Girl and Her Benefactors, and Robinson's The Natural Daughter.
AUTHOR BIOGRAPHY
“This book will attract a significant readership among cultural historians as well as literary critics and will become an essential work in eighteenth-century literature and history." —Robert Markley, University of Illinois
TABLE OF CONTENTS