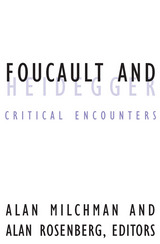 An essential consideration of these two closely related and influential figures.

Michel Foucault and Martin Heidegger are two of the most important intellectual figures of the twentieth century, and yet there are significant, largely unexplored questions about the relationship between their projects. Foucault and Heidegger stages a crucial critical encounter between these two thinkers; in doing so, it clarifies not only the complexities of the Heidegger-Foucault relationship, but also their relevance to questions about truth and nihilism, acquiescence and resistance, and technology and agency that are central to debates in contemporary thought.

These essays examine topics ranging from Heidegger's and Foucault's intellectual forebears to their respective understanding of the Enlightenment, modernity, and technology, to their conceptions of power and the political.

Alan Milchman is lecturer in political science and Alan Rosenberg is associate professor of philosophy, both at Queens College, City University of New York.