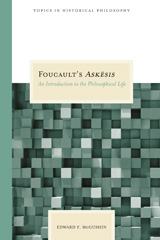 In his renowned courses at the Collège de France from 1982 to 1984, Michel Foucault devoted his lectures to meticulous readings and interpretations of the works of Plato, Epictetus, Seneca, and Marcus Aurelius, among others. In this his aim was not, Edward F. McGushin contends, to develop a new knowledge of the history of philosophy; rather, it was to let himself be transformed by the very activity of thinking. Thus, this work shows us Foucault in the last phase of his life in the act of becoming a philosopher. Here we see how his encounter with ancient philosophy allowed him to experience the practice of philosophy as, to paraphrase Nietzsche, a way of becoming who one is: the work of self-formation that the Greeks called askēsis.
Through a detailed study of Foucault's last courses, McGushin demonstrates that this new way of practicing philosophical askēsis evokes Foucault's ethical resistance to modern relations of power and knowledge. In order to understand Foucault's later project, then, it is necessary to see it within the context of his earlier work. If his earlier projects represented an attempt to bring to light the relations of power and knowledge that narrowed and limited freedom, then this last project represents his effort to take back that freedom by redefining it in terms of care of the self. Foucault always stressed that modern power functions by producing individual subjects. This book shows how his excavation of ancient philosophical practices gave him the tools to counter this function-with a practice of self-formation, an askēsis.
AUTHOR BIOGRAPHY
Edward F. McGushin is assistant professor of philosophy at Saint Anselm College in Manchester, New Hampshire.
TABLE OF CONTENTS

Acknowledgments
Introduction
Part I: Philosophy as Care of the Self
Chapter 1 Truth as a Problem
Chapter 2 The Socratic Moment
Chapter 3 The Poetics of Subjectivity
Chapter 4 The Cynic and the True Life

Part II: Care of the Self in the Age of Reason
Chapter 5 Foucault's Cartesian Meditations
Chapter 6 The Prince and the Pastor: Figures of Power, Care, and Parrhēsia
Chapter 7 Rage for Order, the Advent of Biopower
Chapter 8 Towards a Critique of the Present
Conclusion: A New Poetics of Philosophy
List of Abbreviations
Notes
Bibliography
Index