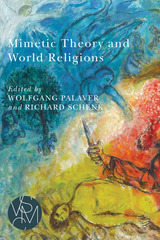 Those who anticipated the demise of religion and the advent of a peaceful, secularized global village have seen the last two decades confound their predictions. René Girard’s mimetic theory is a key to understanding the new challenges posed by our world of resurgent violence and pluralistic cultures and traditions. Girard sought to explain how the Judeo-Christian narrative exposes a founding murder at the origin of human civilization and demystifies the bloody sacrifices of archaic religions. Meanwhile, his book Sacrifice, a reading of conflict and sacrificial resolution in the Vedic Brahmanas, suggests that mimetic theory’s insights also resonate with several non-Western religious and spiritual traditions. This volume collects engagements with Girard by scholars of Judaism, Christianity, Islam, Hinduism, and Buddhism and situates them within contemporary theology, philosophy, and religious studies.
AUTHOR BIOGRAPHY
Wolfgang Palaver is a Professor of Catholic Social Thought at the School of Catholic Theology at the University of Innsbruck, where he was also the Dean from 2013 to 2017.

Richard Schenk, a Roman Catholic Priest of the Dominican Order, served as a Professor of Philosophy and Theology at the Graduate Theological Union in Berkeley from 1990 to 2011, and as the President of the Catholic University of Eichstätt-Ingolstadt from 2011 to 2014.
TABLE OF CONTENTS
Contents
Introduction
Part 1. Mimetic Theory and Religion
Neither Dawkins nor Durkheim: On René Girard’s Theory of Religion, by Jean-Pierre Dupuy
Sacrifice in Hegel and Girard, by Anselm Tilman Ramelow
Reason and Revelation: An Important Distinction?, by John Ranieri
The Messianic Moment: Bergson and Girard, by Benoît Chantre
Girard and Religion in the Age of Secularism, by Otto Kallscheuer
Why Rousseau Cannot Laugh: Structuring Motif—“Achever,” by Jeremiah Alberg
Girard and the Feminist Critique of Religion: Intimate Mediation in Kristeva and Girard, by Martha Reineke
Part 2. Mimetic Theory, Christianity, and Interfaith (Interreligious) Dialogue
Girard and World Religions: The State of the Question, by Robert J. Daly
René Girard and World Religions, by Michael Kirwan
The Ambivalence of Interreligious Historiography: Foreign and Domestic Narratives, by Richard Schenk
Sacrifice as a Contested Concept between R. Schwager and R. Girard and Its Significance for Interreligious Dialogue, by Nikolaus Wandinger
The Abrahamic Revolution, by Wolfgang Palaver
The “Hellenic” Rationality of Interreligious Dialogue: René Girard, Simone Weil, and Pope Benedict XVI, by Ann Astell
Part 3. Rivalry, Sacrifice, and World Religions
Burning Desires, Burning Corpses: Girardian Reflections on Fire in Hinduism and Buddhism, by Brian Collins
Girard and Hindu Sacrifice, by Noel Sheth
The Roots of Violence: Society and the Individual in Buddhism and Girard, by Jacob Dalton and Alexander von Rospatt
Religious Sacrifice, Social Scapegoating, and Self-Justification, by Ted Peters
Judaism and the Exodus from Archaic Religion: Reading René Girard among the World Religions, by Sandor Goodhart
Tawhid: The Oneness of God and the Desire for the Good, by Adam Ericksen
Islam: Law and Violence (and Nonviolence), by Rüdiger Lohlker
Girard and the Analogy of Desire, by James Alison
Contributors
Index
REQUEST ACCESSIBLE FILE