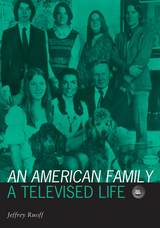 The first in-depth look at this pioneering "reality TV" documentary.

Before 1973, the Loud family of Santa Barbara, California, lived in the privacy of their own home. With the airing of the documentary An American Family, that "privacy" extended to every American home that had a television in it-and there was no going back to the happy land of Beaver, Donna Reed, and Father Knows Best. This book is the first to offer a close, sustained look at An American Family-the documentary that blurred conventions, stirred passions among viewers and reviewers, revised impressions of family life and definitions of private and public, and began the breakdown of distinctions between reality and spectacle that culminated in cultural phenomena from The Oprah Winfrey Show to Survivor.

While placing Craig Gilbert's innovative series in the context of 1970s nonfiction film and television, Jeffrey Ruoff tells the story behind An American Family from conception to broadcast, from reception to long-term impact. He reintroduces us to the Louds as intimate details of their daily lives, from one child's dance recital to another's gay lifestyle to the parents' divorce proceedings, unfold first before the camera and then before American viewers, challenging audiences to think seriously about family, marital relations, sexuality, affluence, and the American dream. In the documentary's immediate impact-on both producers and viewers of media-Ruoff uncovers the roots of new nonfiction forms including confessional talk shows like Oprah, first-person documentary films like Ross McElwee's acclaimed Sherman's March, and reality TV programs such as The Real World, Survivor, and Big Brother.

A comprehensive production and reception study, Ruoff's work restores An American Family to its rightful, pioneering place in the history of American television.

Jeffrey Ruoff is a film historian, documentary filmmaker, and assistant professor of film and television studies at Dartmouth College. He is co-author (with Kenneth Ruoff) of The Emperor's Naked Army Marches On (1998).