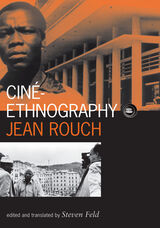 One of the most influential figures in documentary and ethnographic filmmaking, Jean Rouch has made more than one hundred films in West Africa and France. In such acclaimed works as Jaguar, The Lion Hunters, and Cocorico, Monsieur Poulet, Rouch has explored racism, colonialism, African modernity, religious ritual, and music. He pioneered numerous film techniques and technologies, and in the process inspired generations of filmmakers, from New Wave directors, who emulated his cinema verité style, to today’s documentarians.Ciné-Ethnography is a long-overdue English-language resource that collects Rouch's key writings, interviews, and other materials that distill his thinking on filmmaking, ethnography, and his own career. Editor Steven Feld opens with a concise overview of Rouch’s career, highlighting the themes found throughout his work. In the four essays that follow, Rouch discusses the ethnographic film as a genre, the history of African cinema, his experiences of filmmaking among the Songhay, and the intertwined histories of French colonialism, anthropology, and cinema. And in four interviews, Rouch thoughtfully reflects on each of his films, as well as his artistic, intellectual, and political concerns. Ciné-Ethnography also contains an annotated transcript of Chronicle of a Summer—one of Rouch's most important works—along with commentary by the filmmakers, and concludes with a complete, annotated filmography and a bibliography.The most thorough resource on Rouch available in any language, Ciné-Ethnography makes clear this remarkable and still vital filmmaker's major role in the history of documentary cinema.Jean Rouch was born in Paris in 1917. He studied civil engineering before turning to film and anthropology in response to his experiences in West Africa during World War II. Rouch is the recipient of numerous awards, including the International Critics Award at Cannes for the film Chronicle of a Summer in 1961. Steven Feld is professor of music and anthropology at Columbia University.