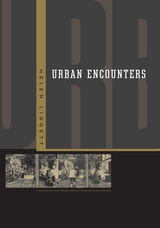 In words and photographs, reimagining the city as lived space.

In contrast to Walter Benjamin, Henri Lefebvre, and other European thinkers engaged with the concept of the urban, American intellectuals tend to envision the modern city as a dystopia, their perception of urban life influenced by negative stereotypes and fictional depictions in popular culture. In Urban Encounters, Helen Liggett challenges this fatalism by approaching the city as a vibrant, lived space. Combining a sophisticated critique of the urban with striking, street-level images, Liggett reclaims the human experience of the city.

Liggett's "encounters" with the urban are sequences of images and text that combine the joy of observing with the pleasure of making connections. For Liggett, this entails recognizing both beauty and danger. Alternately complementing and complicating her text, Liggett's photographs capture the small details-the gestures, glances, and reflections-that together compose the urban experience. As a whole, Urban Encounters reimagines the city as a site of profound engagement with life.

Helen Liggett is professor of urban studies at Cleveland State University. She is coeditor (with David C. Perry) of Spatial Practices: Critical Explorations in Social/Spatial Theory (1995), and her photographs have been exhibited at the Cleveland Center for Contemporary Art.