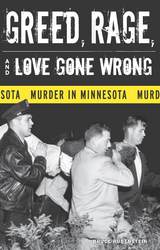 Writing about murder mysteries for over twenty-five years, Bruce Rubenstein gives us a collection of Minnesota crimes in Greed, Rage, and Love Gone Wrong. Whether the killer is greedy and devoid of human compassion, desperate about money or love, or simply filled with bottled-up rage, this book puts the reader at the scene of the most notorious murders in the state.Bruce Rubenstein is a writer who specializes in true crime and legal stories. His work has appeared in many publications, including City Pages, Mpls/St. Paul Magazine, and Chicago Magazine. He is the recipient of the Chicago Bar Association’s Herman Kogan Media Award.
TABLE OF CONTENTS