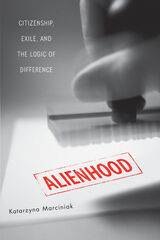 “Alien” has a double meaning in the United States, suggesting both “foreigner” and “extraterrestrial creature.” In Alienhood, Katarzyna Marciniak explores this semantic duality. Interrogating the dominant images of aliens in American popular culture—and in legal, historical, linguistic, and literary discourses—Marciniak examines “alienhood” and the impact it has on the daily experiences of migrants, legal or illegal.

Using examples from exilic literature and cinema, including the works of Julia Alvarez, Eva Hoffman, Gregory Nava, and Roman Polanski, Alienhood theorizes multicultural experiences of liminal characters that belong in the interstices between nations. Investigating gendered, racialized, and ideological formations of “aliens,” Marciniak’s readings put into dialogue narratives from both the second world and the third world in relation to “first worldness.” This dialogue problematizes the meanings of “transnational” and brings the so-called second world into these debates. In doing so, Marciniak reorients the study of immigrant or exile subjects beyond the celebrated notion of transnationalism.

With its unique focus on “aliens” in relation to discourses of immigration, exile, and displacement, Alienhood shows how transnationality is, for many dislocated people, an unattainable privilege.

Katarzyna Marciniak is associate professor of English at Ohio University.
TABLE OF CONTENTS