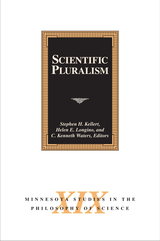 Scientific Pluralism
edited by Stephen H. Kellert, Helen E. Longino and C. Kenneth Waters
University of Minnesota Press, 2006
Cloth: 978-0-8166-4763-7
Scientific pluralism is an issue at the forefront of philosophy of science. This landmark work addresses the question, Can pluralism be advanced as a general, philosophical interpretation of science? Scientific Pluralism demonstrates the viability of the view that some phenomena require multiple accounts. Pluralists observe that scientists present various—sometimes even incompatible—models of the world and argue that this is due to the complexity of the world and representational limitations. Including investigations in biology, physics, economics, psychology, and mathematics, this work provides an empirical basis for a consistent stance on pluralism and makes the case that it should change the ways that philosophers, historians, and social scientists analyze scientific knowledge.Contributors: John Bell, U of Western Ontario; Michael Dickson, U of South Carolina; Carla Fehr, Iowa State U; Ronald N. Giere, U of Minnesota; Geoffrey Hellman, U of Minnesota; Alan Richardson, U of British Columbia; C. Wade Savage, U of Minnesota; Esther-Mirjam Sent, U of Nijmegen.Stephen H. Kellert is professor of philosophy at Hamline University and a fellow of the Minnesota Center for Philosophy of Science. Helen E. Longino is professor of philosophy at Stanford University. C. Kenneth Waters is associate professor of philosophy and director of the Minnesota Center for Philosophy of Science.
TABLE OF CONTENTS