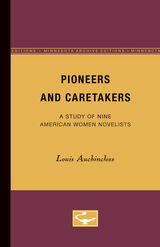 BUY
Pioneers and Caretakers: A Study of Nine American Women Novelists
by Louis Auchincloss
University of Minnesota Press, 1965
Paper: 978-0-8166-6831-1
Pioneers and Caretakers was first published in 1965.In a series of stimulating and highly readable essays, Mr. Auchincloss discusses the work of nine American women novelists in whom he finds a unity of common tradition. As the title of the book implies, Mr. Auchincloss regards these novelists as caretakers of our culture and, at the same time, as literary pioneers. The writers he discusses are Sarah Orne Jewett, Edith Wharton, Ellen Glasgow, Willa Cather, Elizabeth Madox Roberts, Katherine Anne Porter, Jean Stafford, Carson McCullers, and Mary McCarthy.In explaining his thesis Mr. Auchincloss writes: “In the migrations of tribes the women were responsible for the packing and preservation of the household goods. They have always been the true conservatives, the caretakers of the culture. But because in our nation we have to go back so few decades to get to the Indians, the functions of the caretaker and of the pioneer have become curiously blended. To preserve a bit of the American tradition, one has to preserve a bit of the frontier.“A notable thing about our women writers is that they have struck a more affirmative note than the men. Their darkness is not as dark as that of Dreiser or Lewis or Faulkner or O’Neill, which is not to say that they see America less clearly, but that they see it more discriminatingly. They have a sharper sense of their stake in the national heritage, and they are always at work to preserve it. They never destroy; they never want the clean sweep. They are conservatives who are always trying to conserve.”