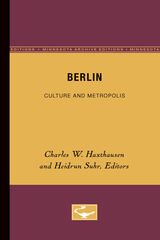 BUY
Berlin: Culture and Metropolis
edited by Charles Haxthausen and Heidrun Suhr
University of Minnesota Press, 1991
Paper: 978-0-8166-6872-4
Berlin: Culture and Metropolis was first published in 1991.Berlin’s recent history is uniquely representative of the major upheavals of the modern era. The city has been a capital under imperialist, democratic, fascist, and communist regimes; it has been devastated by war and has witnessed two revolutions. These changes often have come rapidly, drastically, and unexpectedly.Berlin: Culture and Metropolis includes essays on literature, poetry, film, cabaret, and the visual arts that illustrate how the relationship between the city and its inhabitants has been repeatedly renegotiated with each generation. Scholars in art history, film studies, literature, history, and sociology cover the period from the turn of the century to the present, writing on such topics as twentieth century cabaret, the celebration of the city’s 750th anniversary, and the cultural contributions of Ernst Ludwig Kirchner, George Grosz, Alfred Döblin, Siegfried Kracauer, and Christa Wolf. These essays reveal the often uneasy relationships between twentieth-century Berlin and the culture these changes have produced.