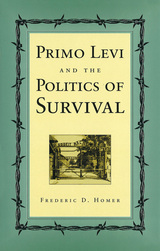 At the age of twenty-five, Primo Levi was sent to Hell. Levi, an Italian chemist from Turin, was one of many swept up in the Holocaust of World War II and sent to die in the German concentration camp in Auschwitz. Of the 650 people transported to the camp in his group, only 15 men and 9 women survived. After Soviet liberation of the camp in 1945, Levi wrote books, essays, short stories, poetry, and a novel, in which he painstakingly described the horrors of his experience at Auschwitz. He also spent the rest of his life struggling with the fact that he was not among those who were killed.

In Primo Levi and the Politics of Survival, Frederic D. Homer looks at Primo Levi's life but, more important, shows him to be a significant political philosopher. In the course of his writings, Levi asked and answered his most haunting question: can someone be brutalized by a terrifying experience and, upon return to "ordinary life," recover from the physical and moral destruction he has suffered? Levi used this question to develop a philosophy positing that although man is no match for life, he can become better prepared to contend with the tragedies in life.

According to Levi, the horrors of the world occur because of the strength of human tendencies, which make relationships between human beings exceedingly fragile. He believed that we are ill-constituted beings who have tendencies toward violence and domination, dividing ourselves into Us and Them, with very shallow loyalties. He also maintained that our only refuge is in education and responsibility, which may counter these tendencies. Homer calls Levi's philosophy "optimistic pessimism."

As Homer demonstrates, Levi took his past experiences into account to determine that goodwill and democratic institutions do not come easily to people. Liberal society is to be earned through discipline and responsibility toward our weaknesses. Levi's answer is "civilized liberalism." To achieve this we must counter some of our most stubborn tendencies.

Homer also explores the impact of Levi's death, an apparent suicide, on the way in which his work and theories have been perceived. While several critics discount Levi's work because of the nature of his death, Homer argues that his death is consistent with his philosophy. A book rich in brutally honest philosophy, Primo Levi and the Politics of Survival compels one to look at serious questions about life, tragedy, optimism, solidarity, violence, and human nature.

Frederic D. Homer is Professor of Political Science at the University of Wyoming in Laramie. He is also the author of Guns and Garlic: Myths and Realities of Organized Crime and Character: An Individualistic Theory of Politics.