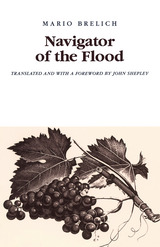 Mario Brelich, a Hungarian author writing in Italian, was a superb ironist. In his three novels, of which this is the first, he explored central episodes of the Old and New Testaments with unsparing wit and intelligence. In Navigator of the Flood, Brelich's Noah is a man laboring under a burden of responsibility by a Lord who appears from time to time to "correct"--at man's expense--His own foreknowledge and omniscience. If Noah finds God's commands at times cruel or incomprehensible, if he still sees beauty in a life now under threat of extinction, and wonders why he and his family should be chosen to survive while all others are condemned to perish, he remains the dutiful and upright patriarch who submits to the role assigned to him.
TABLE OF CONTENTS