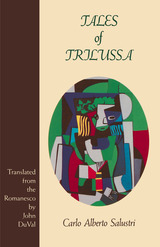 Tales of Trilussa
by Carlo Albert Salustri
translated by John Duval
University of Arkansas Press, 1990
Paper: 978-1-55728-151-7
The greatest poet of the twentieth century to write in Romanesco, Trilussa (1887–1950) gained national and international standing, becoming one of those extremely rare poets who have made their living entirely from their own work. John DuVal chose for translation the best poems from Tutte le poesie, Trilussa’s collected poems, which capture the satire and comic-lyric sensibility of this beloved Roman poet.
REQUEST ACCESSIBLE FILE