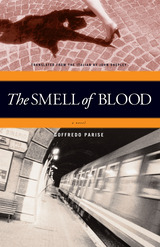 The Smell of Blood
by Goffredo Parise
translated by John Shepley
Northwestern University Press, 2003
Paper: 978-0-8101-6076-7
A compelling tale of a husband's obsession with his wife's disastrous affair

"A smell very similar to that of slaughterhouses at dawn, but infinitely sweeter and slightly nauseating, or rather, to be more precise, exhilarating."

The smell of blood is really the smell of life. The psychiatrist narrating the story has the power to detect it. His young mistress hungers for it. And his middle-aged wife Silvia has just begun to emanate it--overpoweringly.

Silvia has begun an affair with a violent young idler and neofascist who despises and exploits women. At first her husband reacts with good humor--he has long been unfaithful himself. But jealousy soon colors his curiosity, and his obsession with the details of Silvia's relationship leads to fantasies that become self-fulfilling prophecies. At times coolly analytical, at others driven to know more, the narrator watches as Silvia's actions become more and more self-destructive. When she becomes a slave to her lover's wishes the smell of blood grows stronger, and the odor of life becomes an omen of death.

Goffredo Parise wrote The Smell of Blood in 1979 after suffering a heart attack. Once finished he sealed the manuscript in lead and wax and did not look at it again until a few days before his death in 1986. It was published posthumously in 1997 in Italy.
AUTHOR BIOGRAPHY
Goffredo Parise (1929-1986) was an important Italian novelist and journalist. His works include two collections of short narratives, Abecedary (1998) and Solitudes (1998), both published by the Marlboro Press/Northwestern.
REQUEST ACCESSIBLE FILE