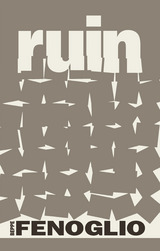 Ruin is an acclaimed 1954 novel by Italian Beppe Fenoglio. It's the story of Augustine Braida, a boy who serves the Rabino family, whose first-person account of life in Langhe paints a vivid portrait of  early twentieth-century Italian peasant life. Told with terrible humility and great force, it is a compassionate and harrowing narrative of peasant endurance in the face of overwhelming hardship.

Born into a working-class family in the town of Alba lying in that part of the Piedmont called LeLanghe, Beppe Fenoglio (1922-1963) belonged to the generation of young Italian writers whose works were molded by their World War II experience and the anti-Fascist Resistance many took part in. Fenoglio fought as a partisan against the German troops occupying Italy, and the major part of his literature is connected with the events of the time.
AUTHOR BIOGRAPHY
Beppe Fenoglio (born Giuseppe Fenoglio 1 March 1922, Alba (CN) - 18 February 1963, Turin) was an Italian writer.
REQUEST ACCESSIBLE FILE