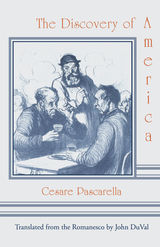 The Discovery of America
by Cesare Pascarella
translated by John DuVal
University of Arkansas Press, 1991
Paper: 978-1-55728-230-9
The scene is a Roman bar, where the narrator tells—in outrageous sonnets—of Columbus’s battle with the Spanish bureaucracy for supplies and ships, of the endless storms that pound the ocean, of the voyagers’ inevitable swindling of the natives, and of Columbus’s final fall from royal favor. After several interruptions and promptings by a skeptical and impatient audience, the narrator comes to the point of his yarn—that genius will sometimes exact a heavy price.

“The detractors of translation are always claiming that poetry, like Frascati, doesn’t travel well—non viaggia bene. But John DuVal’s stunning version of Pascarella’s barroom epic brings it safely across the water. He keeps not only the sonnet form but the way in which the Romanesco poet used it; he captures everywhere the poem’s earthy and artful garrulity, the savor of language delighting in itself.”


“Just in time for the upcoming Columbus quinquecentennial, John DuVal has given us a sprightly rendition of a little-known mock epic that has, itself, long awaited rediscovery. DuVal’s easygoing assonances and unfettered rhythms are as playfully disrespectful of the traditional sonnet form as ins Pascarella’s tongue-in-cheek treatment of his sacrosanct subject. The pleasure that he obviously takes in translating this deflationary adaptation of history from the Romanesco dialect of yesteryear into a jauntily current American idiom will certainly be shared by many readers.”