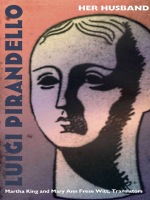 One of the twentieth century’s greatest literary artists and winner of the Nobel prize in 1934, Luigi Pirandello wrote the novel Her Husband in 1911, before he produced any of the well-known plays with which his name is most often associated today. Her Husband—translated here for the first time into English—is a profoundly entertaining work, by turns funny, bitingly satirical, and tinged with anguish. As important as any of the other works in Pirandello’s oeuvre, it portrays the complexities of male/female relations in the context of a newly emerging, small but vocal Italian feminist movement.
Evoking in vivid detail the literary world in Rome at the turn of the century, Her Husband tells the story of Silvia Roncella, a talented young female writer, and her husband Giustino Boggiolo. The novel opens with their arrival in Rome after having left their provincial southern Italian hometown following the success of Silvia’s first novel, the rather humorously titled House of Dwarves. As his wife’s self-appointed (and self-important) promoter, protector, counselor, and manager, Giustino becomes the primary target of Pirandello’s satire. But the couple’s relationship—and their dual career—is also complicated by a lively supporting cast of characters, including literary bohemians with avant-garde pretensions and would-be aristocratic esthetes who are all too aware of the newly acquired power of journalists and the publishing establishment to make or break their careers. Having based many of the characters—including Silvia and Giustino—on actual literary acquaintances of his, Pirandello reacted to the novel’s controversial reception by not allowing it to be reprinted after the first printing sold out. Not until after his death were copies again made available in Italy.
Readers will find Her Husband eerily evocative of the present in myriad ways—not the least of which is contemporary society’s ongoing transformation wrought by the changing roles of men and women, wives and husbands.

Luigi Pirandello (1867–1936), Italian dramatist, novelist, short story and essay writer, was awarded the Nobel Prize for Literature in 1934. Pirandello shares the stage with Ibsen and Brecht as one of the most influential modern dramatists of the early twentieth century. A prolific writer, he began his literary career as a novelist and writer of short stories, the best known of which is the novel The Late Mattia Pascal, published in 1904. Pirandello’s plays (nearly forty of them) won him an international reputation, with Six Characters in Search of an Author (1921) providing his most enduring contribution to modern European theater. Her Husband (1911) is Pirandello’s fifth novel.

Martha King is the translator of numerous books. Mary Ann Frese Witt is Professor of French and Italian at North Carolina State University.

REVIEWS
“Pirandello’s fiction has been overshadowed in America by his epoch-making plays, and one of his seven extraordinary novels has never even been published in English. Till now, that is, thanks to excellent translators, Martha King and Mary Ann Frese Witt. American readers will have great fun with Her Husband.”—Eric Bentley


&ldquo;[Pirandello&rsquo;s] real interest seems to lie in exploring the relationship between femininity and creativity, an interest that takes his artistry far beyond his own time and his own prejudices to chart new territory. His intricate and subtle explorations of the mind of the woman writer, of the relations between creation and procreation, and the contradictions inherent in literature as art and literature as business, speak to the preoccupation of the twenty-first century as they did to the first years of the 1900s.&rdquo;&mdash;from the Afterword

TABLE OF CONTENTS
Contents
Acknowledgments
1. The Banquet
2. School for Greatness
3. Mistress Roncella: Two Accouchements
4. After the Triumph
5. The Chrysalis and the Caterpillar
6. The Flight
7. A Light Gone Out
Afterword
REQUEST ACCESSIBLE FILE