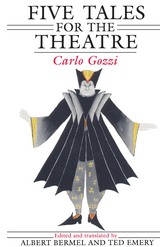 For Count Carlo Gozzi (1720-1806), theater was a fabulous world apart, in which human beings, statues, and animals change places by magical transformations. Gozzi's stage becomes a multiscenic home for adventures, loves, enmities, and dazzling visual effects. This collection brings together for the first time modern English translations of five of Gozzi's most famous plays: The Raven, The King Stag, Turandot, The Serpent Woman, and The Green Bird, each annotated by the translators and preceded by the author's preface. Ted Emery's Introduction places Gozzi in his social and historical context, tracing his world view in both the content and the form of his tales.

In the ten works he called fiable or fairy tales, Gozzi intermingled characters from the traditional and improvised commedia dell'arte with exotic figures of his own invention. During Gozzi's lifetime, Goethe and Schiller translated and produced some of his dramas at the Weimar Theatre. In our century, the dramas have reasserted themselves under the direction of Max Reinhardt, Vsevolod Meyerhold, George Devine, and Benno Besson, as well as in operatic adaptations by Puccini and Prokofiev.

The powerful conflicts, the idyllic and fearsome settings, and the startling transformations in these plays offer exceptional opportunities to actors, directors, and designers. The lively translations are faithful to Gozzi's Italian, while being eminently playable for English-speaking audiences today. Two of the translations have already had highly successful stagings by Andrei Serban at the American Repertory Theatre and on tour.
AUTHOR BIOGRAPHY
Albert Bermel is professor of theatre at Lehman College and the Graduate Center of the City University of New York. Ted Emery is assistant professor of Italian at New York University.
TABLE OF CONTENTS