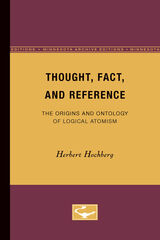 BUY
Thought, Fact, and Reference: The Origins and Ontology of Logical Atomism
by Herbert Hochberg
University of Minnesota Press, 1978
Paper: 978-0-8166-6880-9
Thought, Fact, and Reference was first published in 1978.Against a background of criticism of alternative accounts, Professor Hochberg presents an analysis of thought, reference, and truth within the tradition of logical atomism. He analyzes G. E. Moore’s early attack on idealism and examines the influence of Moore on the development of Bertrand Russell’s and Ludwig Wittgenstein’s logical atomism. He traces an early divergence between Russell and Wittgenstein, on the one side, and Moore and Gottlob Frege on the other, into variants recently advocated by Wilfrid Sellars, Gustav Bergmann, and others. The work will be of interest to professional philosophers, graduate students in philosophy, and linguists with interests in philosophy.