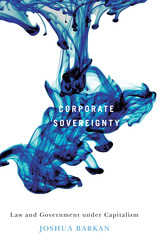 Refinery explosions. Accounting scandals. Bank meltdowns. All of these catastrophes—and many more—might rightfully be blamed on corporations. In response, advocates have suggested reforms ranging from increased government regulation to corporate codes of conduct to stop corporate abuses. Joshua Barkan writes that these reactions, which view law as a limit on corporations, misunderstand the role of law in fostering corporate power.

In Corporate Sovereignty, Barkan argues that corporate power should be rethought as a mode of political sovereignty. Rather than treating the economic power of corporations as a threat to the political sovereignty of states, Barkan shows that the two are ontologically linked. Situating analysis of U.S., British, and international corporate law alongside careful readings in political and social theory, he demonstrates that the Anglo-American corporation and modern political sovereignty are founded in and bound together through a principle of legally sanctioned immunity from law. The problems that corporate-led globalization present for governments result not from regulatory failures as much as from corporate immunity that is being exported across the globe.

For Barkan, there is a paradox in that corporations, which are legal creations, are given such power that they undermine the sovereignty of states. He notes that while the relationship between states and corporations may appear adversarial, it is in fact a kind of doubling in which state sovereignty and corporate power are both conjoined and in conflict. Our refusal to grapple with the peculiar nature of this doubling means that some of our best efforts to control corporations unwittingly reinvest the sovereign powers they oppose.

Joshua Barkan is assistant professor of geography at the University of Georgia.

Corporate Sovereignty provides a genealogy of corporate power, and argues that it is historically and ontologically linked to modern political sovereignty. Joshua Barkan takes the reader with care and attention through complex legal debates, and draws out those aspects that are fascinating in the contemporary context. He contributes to the academic debate concerning understandings of corporate power in the age of globalization, and speaks to theoretical debates concerning the theoretisation of the exception, as is done through the work of Agamben and others. The result is a wonderful book that genuinely sheds new light on our current understandings of corporate power.
—Marieke de Goede, University of Amsterdam