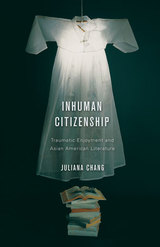 In Inhuman Citizenship, Juliana Chang claims that literary representations of Asian American domesticity may be understood as symptoms of America’s relationship to its national fantasies and to the “jouissance”—a Lacanian term signifying a violent yet euphoric shattering of the self—that both overhangs and underlies those fantasies. In the national imaginary, according to Chang, racial subjects are often perceived as the source of jouissance, which they supposedly embody through their excesses of violence, sexuality, anger, and ecstasy—excesses that threaten to overwhelm the social order.

To examine her argument that racism ascribes too much, rather than a lack of, humanity, Chang analyzes domestic accounts by Asian American writers, including Fae Myenne Ng’s Bone, Brian Ascalon Roley’s American Son, Chang-rae Lee’s Native Speaker, and Suki Kim’s The Interpreter. Employing careful reading and Lacanian psychoanalysis, Chang finds sites of excess and shock: they are not just narratives of trauma; they produce trauma as well. They render Asian Americans as not only the objects but also the vehicles and agents of inhuman suffering. And, claims Chang, these novels disturb yet strangely exhilarate the reader through characters who are objects of racism and yet inhumanly enjoy their suffering and the suffering of others.

Through a detailed investigation of “family business” in works of Asian American life, Chang shows that by identifying with the nation’s psychic disturbance, Asian American characters ethically assume responsibility for a national unconscious that is all too often disclaimed.

Juliana Chang is associate professor in the English Department at Santa Clara University.

4. Perverse Citizenship: The Death Drive and Suki Kim’s The Interpreter