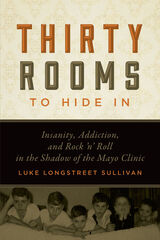 Author Luke Longstreet Sullivan has a simple way of describing his new memoir: “It’s like The Shining . . . only funnier.” Thirty Rooms to HideIn tells the astonishing story of Sullivan’s father and his descent from one of the world’s top orthopedic surgeons at the Mayo Clinic to a man who is increasingly abusive, alcoholic, and insane, ultimately dying alone on the floor of a Georgia motel room. For his wife and six sons, the years prior to his death were characterized by turmoil, anger, and family dysfunction; but somehow they were also a time of real happiness for Sullivan and his brothers, full of dark humor and much laughter.

Through the 1950s and 1960s, the six brothers had a wildly fun and thoroughly dysfunctional childhood living in a forbidding thirty-room mansion, known as the Millstone, on the outskirts of Rochester, Minnesota. The many rooms of the immense home, as well as their mother’s loving protection, allowed the Sullivan brothers to grow up as normal, mischievous boys. Against a backdrop of the times—the Cold War, the Cuban Missile Crisis, fallout shelters, JFK’s assassination, and the Beatles—the cracks in their home life and their father’s psyche continue to widen. When their mother decides to leave the Millstone and move the family across town, the Sullivan boys are able to find solace in each other and in rock ’n’ roll.

As Thirty Rooms to HideIn follows the story of the Sullivan family—at times grim, at others poignant—a wonderful, dark humor lifts the narrative. Tragic, funny, and powerfully evocative of the 1950s and 1960s, Thirty Rooms to Hide In is a tale of public success and private dysfunction, personal and familial resilience, and the strange power of humor to give refuge when it is needed most, even if it can’t always provide the answers.

Luke Longstreet Sullivan worked in the advertising business for thirty years and is now chair of the advertising department at the Savannah College of Art and Design. He is the author of the popular advertising book Hey Whipple, Squeeze This: A Guide to Creating Great Ads and writes the blog heywhipple.com. He lives in Savannah with his wife and two sons.

Funeral
The Millstone
Skeletons in the Closet
Bone Doctors
Grandma Rock Sentences Everyone to Hell
Little Christians, All in a Row
Little Monsters in Every Room
Memory: Throwing Up
A Library of Her Own
Forts, Death, and Bedtime
Cold War
Five O’clock Shadow
Head X-Ray: Roger in 1957
Shit Gathers in General Area of Fan
Cyclops and the Fallout Shelter
Memory: Dad Helps with Homework
Hidden Books, Hidden Letters
Eleven Twenty-two
Fun at the Foot of the Volcano
Rat Helicopters
Cause of Death: Unknown
The Pagans
“Spats with the Wife”
Memory: I Am “Suave Ghost”
The Alcoholic’s Guide to Ruining Evenings
Snowballs Somehow Made in Hell
Memory: I Am “Little Brother Man”
Leaving the Millstone
“We’ve Always Lived in This Castle”
Haunted House
Ceiling Tiles over a Psychiatrist’s Couch
Memory: I Am “Quiet Man”
Things That Were Scarier Than Dad
Baba Yaga
Memory: I Am the Fifth Beatle
Hiding in the Bathroom from Bullets
Hiding in the Tower Library
Memory: I Am the Incredible Hulk
Memory: I Am “Lonely Guy”
Pagan Rites
Eye of the Hurricane
No Help from God
Case #34233
Daydream: I Am “the Bullshit Police”
“Our Drummer Committed Suicide”
One Last Good Christmas
Tiny Details in Family Pictures
Daydream: I Save Dad
Goodnight, Irene
Whiteout/Blackout
Meltdown in West Palm Beach
“Do I Owe You Any Money?”
The Famous Final Scene
Zee Tortured Arteest
Phone Calls from the Dead
The Mortal Coil
Room 50
The Irish Flu
Sunday, July 3, 1966
Pagans in the Temple
One Last Look
Sunlight Streams through a High Window
I Believe in God Briefly
The Big Bad World
Take a Sad Song and Make It Better
This Very Room
“And Every Winter Change to Spring”