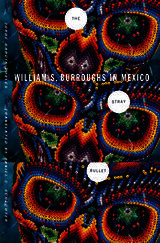 William S. Burroughs arrived in Mexico City in 1949, having slipped out of New Orleans while awaiting trial on drug and weapons charges that would almost certainly have resulted in a lengthy prison sentence. Still uncertain about being a writer, he had left behind a series of failed business ventures—including a scheme to grow marijuana in Texas and sell it in New York—and an already long history of drug use and arrests. He would remain in Mexico for three years, a period that culminated in the defining incident of his life: Burroughs shot his common-law wife, Joan Vollmer, while playing William Tell with a loaded pistol. (He would be tried and convicted of murder in absentia after fleeing Mexico.)

First published in 1995 in Mexico, where it received the Malcolm Lowry literary essay award, The Stray Bullet is an imaginative and riveting account of Burroughs’s formative experiences in Mexico, his fascination with Mexico City’s demimonde, his acquaintances and friendships there, and his contradictory attitudes toward the country and its culture. Mexico, Jorge García-Robles makes clear, was the place in which Burroughs embarked on his “fatal vocation as a writer.”

Through meticulous research and interviews with those who knew Burroughs and his circle in Mexico City, García-Robles brilliantly portrays a time in Burroughs’s life that has been overshadowed by the tragedy of Joan Vollmer’s death. He re-creates the bohemian Roma neighborhood where Burroughs resided with Joan and their children, the streets of postwar Mexico City that Burroughs explored, and such infamous figures as Lola la Chata, queen of the city’s drug trade. This compelling book also offers a contribution by Burroughs himself—an evocative sketch of his shady Mexican attorney, Bernabé Jurado.

Jorge García-Robles is a Mexican novelist, critic, and translator; he is considered the leading authority on the Beats in Mexico. He translated Jack Kerouac’s Lonesome Traveler, Tristessa, Mexico City Blues, and “Cerrada Medellín Blues” and William Burroughs’s The Yage Letters into Spanish.

Preface to the U.S. Edition

The Stray Bullet
Part I. The Road to Hell
Blame It on Brahms
Welcome to Your Destiny
Journey of No Return
From Psychiatric Hospital to Farm
The Farm Has Visitors
Risky Business in New York
Last Stop, New Orleans

Part II. The Gods Know How to Run This World
¡Viva México!
Nation of Copycats
Arrival in Tenochtitlán
From Veteran to Student
The Devil’s Advocate
My Most Unforgettable Character
The Devil’s Advocate
A Writer’s Beginnings
The Usual Suspects
Lola la Chata
Excitable Joan
On the Road
The Scorpion
Not So Lovely and Beloved Mexico
The Tortured Cat
The Bounty
Drowning in Drink
Various Incidents
The Elusive Lover
There Goes the Neighborhood
Jungle Journey
Under the Volcano
The Stray Bullet
The Trial
The Ugly Spirit
Monday, Signature Day
Queer
Man of Letters
The Return of Jack
An Overcoat Thief in Mexico
The Departure
The Parting Shot
A Contribution from Mexico to the World

A Note on Sources