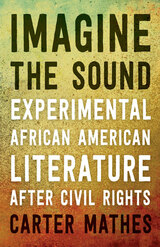 The post–Civil Rights era was marked by an explosion of black political thought and aesthetics. Reflecting a shifting horizon of expectations around race relations, the unconventional sounds of free jazz coupled with experimental literary creation nuanced the push toward racial equality and enriched the possibilities for aesthetic innovation within the Black Arts Movement. In Imagine the Sound, Carter Mathes demonstrates how African American writers used sound to further artistic resistance within a rapidly transforming political and racial landscape.

While many have noted the oral and musical qualities of African American poetry from the post–Civil Rights period, Mathes points out how the political implications of dissonance, vibration, and resonance produced in essays, short stories, and novels animated the ongoing struggle for equality. Situating literary works by Henry Dumas, Larry Neal, and Toni Cade Bambara in relation to the expansive ideas of sound proposed by free jazz musicians such as Marion Brown and Sun Ra, not only does this book illustrate how the presence of sound can be heard and read as political, but it recuperates critically neglected, yet important, writers and musicians. Ultimately, Mathes details how attempts to capture and render sound through the medium of writing enable writers to envision alternate realities and resistance outside of the linear frameworks offered by the Civil Rights and Black Power movements.

In precise and elegant prose, Mathes shows how in conceptualizing sound, African American writers opened up the political imaginations of their readers. By exploring this intellectual convergence of literary artistry, experimental music, and sound theory, Imagine the Sound reveals how taking up radically new forms of expression allows us to speak to the complexities of race and political resistance.

Carter Mathes is associate professor of English at Rutgers University.

“With extraordinary sensitivity, Carter Mathes explores the ways that sound plays a crucial role in African American literature as a means of indexing a space of thought. Imagine the Sound takes its place among the best recent scholarship, teaching us what it means to read in the wake of the Black Arts Movement.” —Brent Hayes Edwards, author of The Practice of Diaspora: Literature, Translation, and the Rise of Black Internationalism

Introduction: The Acoustics of Unfreedom