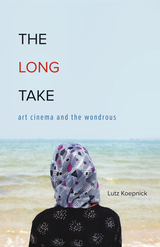 In The Long Take, Lutz Koepnick posits extended shot durations as a powerful medium for exploring different modes of perception and attention in our fast-paced world of mediated stimulations. Grounding his inquiry in the long takes of international filmmakers such as Béla Tarr, Tsai Ming-liang, Abbas Kiarostami, Apichatpong Weerasethakul, and Michael Haneke, Koepnick reveals how their films evoke wondrous experiences of surprise, disruption, enchantment, and reorientation. He proceeds to show how the long take has come to thrive in diverse artistic practices across different media platforms: from the work of photographer Hiroshi Sugimoto to the screen-based installations of Sophie Calle and Tacita Dean, from experimental work by Francis Alÿs and Janet Cardiff to durational images in contemporary video games.

Deeply informed by film and media theory, yet written in a fluid and often poetic style, The Long Take goes far beyond recent writing about slow cinema. In Koepnick’s account, the long take serves as a critical hallmark of international art cinema in the twenty-first century. It invites viewers to probe the aesthetics of moving images and to recalibrate their sense of time. Long takes unlock windows toward the new and unexpected amid the ever-mounting pressures of 24/7 self-management.

Lutz Koepnick is Gertrude Conaway Vanderbilt Professor of German, Cinema, and Media Arts at Vanderbilt University. He is author of On Slowness: Toward an Aesthetic of the Contemporary, Framing Attention: Windows on Modern German Culture, The Dark Mirror: German Cinema between Hitler and Hollywood, and many others.

Introduction: Toward a Wondrous Spectator

6. The Wonders of Being Stuck