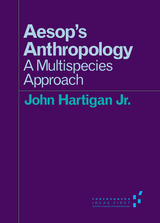 BUY
Aesop's Anthropology: A Multispecies Approach
by John Hartigan Jr.
University of Minnesota Press
Paper: 978-0-8166-9684-0
eISBN: 978-1-4529-4454-8
Aesop’s Anthropology is a guide for thinking through the perplexing predicaments and encounters that arise as the line between human and nonhuman shifts in modern life. Recognizing that culture is not unique to humans, John Hartigan Jr. asks what we can learn about culture from other species. He pursues a variety of philosophical and scientific ideas about what it means to be social using cultural dynamics to rethink what we assume makes humans special and different from other forms of life. Through an interlinked series of brief essays, Hartigan explores how we can think differently about being human.

Forerunners: Ideas First is a thought-in-process series of breakthrough digital publications. Written between fresh ideas and finished books, Forerunners draws on scholarly work initiated in notable blogs, social media, conference plenaries, journal articles, and the synergy of academic exchange. This is gray literature publishing: where intense thinking, change, and speculation take place in scholarship.
AUTHOR BIOGRAPHY
John Hartigan Jr. is professor of anthropology and director of the Américo Paredes Center for Cultural Studies at the University of Texas at Austin.