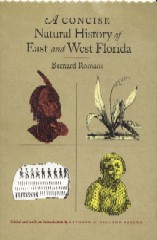 Bernard Romans's A Concise Natural History of East and West Florida, William Bartram's Travels, and James Adair's History of the American Indian are the three most significant accounts of the southeastern United States published during the late 18th century. This new edition of Romans's Concise Natural History, edited by historian Kathryn Braund, provides the first fully annotated edition of this early and rare description of both the European settled areas and the adjoining Indian lands in what are now the states of Florida, Georgia, Alabama, Mississippi, and Louisiana.

Romans's purpose in producing his Concise Natural History was twofold: to aid navigators and shippers by detailing the sailing passages of the region and to promote trade and settlement in the region. To those ends, he provided detailed scientific observations on the natural history of the area, a summary of the region's political history, and an assessment of the potential for economic growth in the Floridas based on the area's natural resources.

A trained surveyor and cartographer and a self-taught naturalist, Romans supplied detailed descriptions of the region's topography and environment, including information about the climate and weather patterns, plants, animals, and diseases. He provided information about the state of scientific inquiry in the South and touched on many of the most important intellectual arguments of the day, such as the origin of the races, the practice of slavery, and the benefits and drawbacks of monopoly on trade.

In addition, Concise Natural History can be placed firmly in the genre of colonial promotional literature. Romans's book was an enthusiastic guide aimed at those seeking to establish modest holdings in the region:

"What a field is open here! . . . No country ever had such inexhaustible resources; no empire had ever half so many advantages combining in its behalf!" Romans explained how settlers should travel to the area, what they would need in terms of provisions and tools, and what it would cost to have their land surveyed. In addition to providing an abundance of practical advice, Romans also offered information about the history of earlier settlements, including the earliest and most complete account of New Smyrna near St. Augustine.

Romans also presented unique information about the various Indian tribes he encountered. In fact, historians agree that among the most useful portions of the book are Romans's descriptions of the largest Indian tribes in the 18th-century Southeast: the Creeks, Choctaws, and Chickasaws. Romans's account of the diet of the Creeks and Choctaws is one of the most complete available. And his description of the location of Choctaw village sites is one of the best sources for this information.

AUTHOR BIOGRAPHY
Kathryn E. Holland Braund is an independent scholar living in Dadeville, Alabama and editor of Adair's History of the American Indian
TABLE OF CONTENTS
Contents
Illustrations and Maps
A Note on This Edition
Acknowledgments
Bernard Romans: His Life and Works
Romans’s History as a Source for Understanding the Eighteenth-Century South
Romans’s Copper Plate I llustrations, Maps, and Table
A Concise Natural History of East and West Florida
Notes
Bibliography
Index