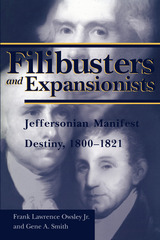 This compelling narrative demonstrates the passionate interest the
Jeffersonian presidents had in wresting land from less powerful foes and
expanding Jefferson's "empire of liberty."

The first two decades of the 19th century found many Americans
eager to move away from the crowded eastern seaboard and into new areas
where their goals of landownership might be realized. Such movement was
encouraged by Presidents Jefferson, Madison, and Monroe- collectively known
as the Jeffersonians- who believed that the country's destiny was to have
total control over the entire North American continent. Migration patterns
during this time changed the country considerably and included the roots
of the slavery controversy that ultimately led to the Civil War. By the
end of the period, although expansionists had not succeeded in moving into
British Canada, they had obtained command of large areas from the Spanish
South and Southwest, including acreage previously controlled by Native
Americans.

Utilizing memoirs, diaries, biographies, newspapers, and vast amounts
of both foreign and domestic correspondence, Frank Lawrence Owsley, Jr.,
and Gene A. Smith reveal an insider's view of the filibusters and
expansionists, the colorful- if not sometimes nefarious- characters on
the front line of the United States's land grab. Owsley and Smith describe
in detail the actions and characters involving both the successful and
the unsuccessful efforts to expand the United States during this period-
as well as the outspoken opposition to expansion, found primarily among
the Federalists in the Northeast.

Frank L. Owsley Jr. is Professor Emeritus of History at Auburn University and author of Struggle for the Gulf Borderlands: The Creek War and the Battle of New orleans, 1812–1815.

Gene A. Smith is Professor of History at Texas Christian University and author of Thomas ap Catesby Jones: Commodore of Manifest Destiny.